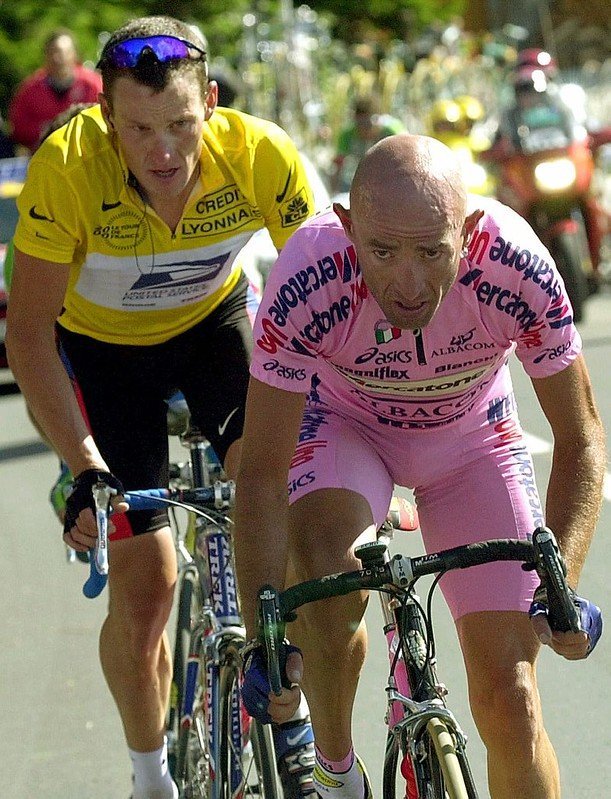 This is a chapter where I’m going to focus on psychology and talent because they’re important in life and investment.

I chose a particular image because in my opinion despite everything that happened in the 90s and 2000s Lance Armstrong and Marco Pantani are the two strongest cyclists in history together with Fausto Coppi, Gino Bartali and Eddy Merckx.

I make a premise in sport at a competitive level I don’t think it is absolutely possible to achieve certain goals “naturally” without having some help, so if anyone thinks that doping exists only in cycling they should start waking up and opening their eyes.

Everyone will know the Texan cyclist Lance Armstrong and his controversial history, without going into the dynamics I would like to emphasize the psychology and mind of a person who defeated cancer with metastases to the brain and testicles.

I want you to think, imagine taking a medical examination and diagnosed with cancer, how would you react? Statistically how many would see their lives as a countdown waiting for the day of the end? How many of you psychologically would be able to fight seriously with all your might?

Lance Armstrong defeated cancer between 1996 and 1998, 3 years later in 1999 after winning his first of the 7 Tour de France. Yes, it was true that he used doping, but everyone else was also doped or maybe not? I don’t think it’s enough to dope to win 7 Tour de France, I mean psychology and training are keys to winning in sport, in life and in the financial markets.

In trading 70% is psychology while 30% is technical analysis and if the statistics say that 80/90% lose money investors show that they do not know how to manage their emotions. If Lance Armstrong had thought and experienced how 90% of investors would have died.

Mind and body are damn connected, if you have any disease and your mind is weak you will have much more difficulty than a person who is strong psychologically. I am not a doctor but I have read medical articles where experts point out how decisive psychology is in defeating (as far as possible) disease.

Here’s an example, you’re a trader and you buy a Tesla stock, don’t you have a money management plan how do you plan to win the war?

As soon as you start losing if you don’t have a calculated stop loss how do you think your mind can react? Fear, panic, sadness just to say a few words and then psychologically how will you feel when you decide to enter the market?

Now I want to talk about talent and for me Marco Pantani (the only cyclist until now to have won the same year Giro d’Italia and Tour de France) is the character who embodies this word. I’m not here to list his memorable victories and unique and spectacular style but to emphasize what talent is.

The word talent is a skill, a feature that is discovered throughout life, for sportsmen it happens at a young age for other people there is no time limit. I think talent is a skill that’s a little innate almost like a gift that can then be trained over time to achieve success in life.

Marco Pantani was a cyclist who won the stages without help from his wingmen because he had a natural predisposition so superior to the others that it allowed him to win (ask Miguel Indurain when the road started to rise).

In investments it is the same situation, you can study as much as you want in the best universities of economics and finance, master of technical analysis, strategies of the largest traders, sophisticated trading systems or lessons with “gurus” but in the end it will always be you who click on buy or sell.

If you don’t have the vision, if you don’t feel the market or you don’t understand the mechanics of the financial markets, how can you think of cheating?

Many people (I personally know many) “believe” that they have talent and be smarter and better than the others and then when they realize the reality of the facts they become envious and arrogant by not accepting the success of others.

Several of my acquaintances when I was talking about a friend of mine who studied at Mit (Massachusetts Institute of Technology) kept saying, yes he got there because his father has the economic possibilities, I said, do you know the requirements to enter MIT? This friend of mine holds 3 degrees in mathematics, physics and finance…

Do you think it’s the money? Or maybe this friend of mine has the talent and perseverance to study at the best university in the world that most don’t have?

Unfortunately compared to 30/40/50 years ago society has changed for the worse, today envy and arrogance of too many people divide friendships, human relationships and families and I would add that social networks have helped to amplify this situation with bad examples.

I summarize this article based on psychology and talent saying that not everyone can be the first in the class but to become mature you have to be aware of your physical and psychological limitations.

As a friend of mine always says: a donkey will never become a horse.

Insight into Bitcoin, list reliable platforms and 3 titles to monitor

Why invest in companies working in the water sector?