The Seven Deadly Sins in Trading 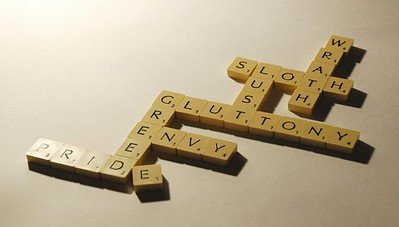 This is the first in a series of somewhat particular articles where I want to reflect on some important issues that affect our lives, in this post I will illustrate the seven deadly sins in trading.

I already know that someone will be wondering the relationship between the seven deadly sins and trading, my answer there are more than you can imagine, believe me, every day your mind lives one of the 7 for at least 1 second.

Number 7 has an important role in different religions, for example in the Jewish one Menorah represents candlestick with 7 lights on, then there are the 7 plagues of Egypt and still in Buddhism has a meaning. For the Catholic religion, the seven deadly sins are:

By applying the seven sins to the trading world I want to show you a different point of view, let’s start with:

Gluttony, not only represents a desire for food but wants more and more. Imagine being in front of 2 monitors with charts and prices going up and down and for example your stock is gaining, most traders fail to stop.

In your mind it’s as if you’ve installed a non-stop trend following mechanism, a bit like at the casino when “compulsive” players become incredibly insatiable.

The second deadly sin related to gluttony is lust, a manifestation of the discomfort typical of our society, in trading could be search for new emotions where new investments make us feel the thrill.

Over-trading when we are eager to make big gains and therefore open too many positions to take advantage of the market opportunities without then being able to manage them. Another element related to lust is when investors are emotionally involved by fake internet advertising or “guru” with the promise of earning millions of dollars.

Pride is a sin that has grown exponentially in recent years and at all levels of society, I see too many people who have an attitude of superiority thinking that they are the best and know everything. How many traders think they are like Jordan Belfort or the best because they earn millions of dollars, unfortunately human disposition is conditioned by the desire to excel over others creating an increasingly competitive atmosphere.

Slot is that person who refuses life, how many traders are fundamentally defeated because they say: meanwhile they command their hands strong and give up trying.

They don’t live on emotions like me, but they’re passive to life.

One of the seven deadly sins that most affects a trader’s life is anger. This mood blinds the mind, unleashing anger and irrepressible nastiness, believe me, I know many traders who when they lose money become frustrated by the situation.

In investments the word revenge must be eliminated, if you do not you lose a lot of money and your life will be troubled.

Greed affects the way you trade because over-attachment to money leads the investor into a mental state of obsession and fear of not having enough.

Miserly people live as if they were prisoners and are influenced by money without considering who is around them.

Greed trader can hardly be complete because in my opinion he has a limited view of financial markets, it is true that money management before entering the market is fundamental, but focusing only on the possession of money is destructive.

I end the article of the seven deadly sins with envy, I wanted to talk about it last, because I think it is the cancer of our society.

How many people do you meet every day, maybe smile at you and hug you but they’re basically envious of you?

Think about it, unfortunately the envious do not stand them because they are the first to enjoy your misfortunes. Imagine earning this afternoon 1000 dollars, how many would be happy for you or would they say but how did this fool earn so much?

Envious people are the worst because they have the presumption of being better than others, my father has always taught me if you think you are the best to prove it.

Those who do not have the skills, the will, the perseverance or the talent must learn to accept the reality of facts, not all of us can be Steve Jobs, Richard Branson or Phil Michelson, I want to give advice to the envious start to work every day hard then maybe you will have results.

No Pain No Gain.

Invest on a house near or inside the marinas

Invest in padel the sport of the moment